How are pearls created?

Here's a detailed story on the origin of pearls

Before unravelling all secrets, because of the sheer amount of information we want to share here, we've split this blog up for you, providing you a short explanation and an elaborate one afterwards. If you want the whole story on how pearls are made, it's definitely worth reading it all the way through!

From a very early time in mankind's history, pearls became treasures, a symbol of wealth, power and prestige and at the same time were met with devotion and respect. It is not difficult to imagine that the first pearls were found accidentally while searching for food and that the white and shining objects attracted the admiration of our early ancestors. The first actual known pearl necklace comes from excavations at the palace of a Persian King, which had been hidden inside a sarcophagus for nearly 2500 years, until it found its way to the Louvre in Paris in 1908.

Although it is pretty much common knowledge that the origin of the pearl lays in the mollusc (weekdier), be it a type of oyster or mussel, still to this day, there is quite a mystery around the actual formation of the pearl inside the mollusc. What goes on in this living creature's shell, that it naturally starts producing these amazing little orbs of beauty?

Let's start with a simplified and general description of the natural pearl production process.

The shells of the mollusc provide the creature a solid protection from the external threats. However, where the shells touch in the middle, there is a softer substance surrounding the inside layers under the shells called mantle tissue. This tissue is a source of food for some fish and organisms, so occasionally these small creatures will nibble on the tissue, puncturing it and creating small holes at the edge of the shells.
The small holes in the tissue can then allow for a foreign body (mostly tiny organisms or sand) to enter the shell. When the foreign body comes in to the mantle tissue, the cells of the mollusc will start forming a bag around it. Through time, the pearl will then be formed inside the pearl bag, where the foreign body that entered the mantle, will serve as a nucleus or core to build the pearl around.

There you go, you got the gist of it. Like the birth of the goddess Venus, the pearl is found in its shell and instantly astonishes everyone with its beauty.

Of course, this was merely a simplified summary…You want to know what really happens? Still have questions like:

But what about pearls cultured by man?
What kind of "Bag" are we talking about here?
Is it really that simple? What happens on the cellular level?
So a fish can swim in the shells and become a pearl?

Well, then I invite you to read through to the end, you'll be an expert before you know it!

Let's break it down for a minute and give you an overview of what's to come in this mini-course:

The formation of a natural pearl with a foreign core

By now you know that to grow a pearl, we need a pearl bag in the mussel or oyster. To form this pearl bag, it is essential that the Epithelium cells of the upper layer of the mantle, are transferred in the connective tissue of the mantle to from a closed cyst…wait…What? 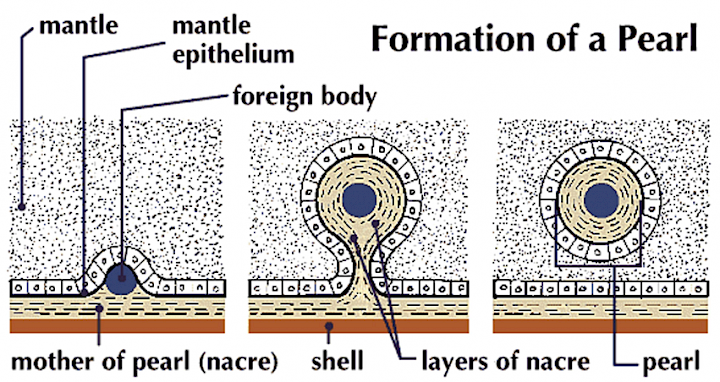 When there is an injury on the outside of the shell, where the mantle tissue covers inner layers, a foreign body can penetrate the mollusc via the Nacre, or mother of pearl. The foreign body puts pressure on the upper epithelium layer, which ultimately transfer or multiply into the connective tissue of the mantle. At some point, the epithelium cells will disconnect from the upper layer and form a bag around the foreign body and start producing pearly matter.

How pearls get their different looks

The pearl is produced by 3 different types of secretion by the Epithelium cells, all depending on the age or stadium the cells are in. The three secretions that form the pearl are:

The combination of these secretions can be different for every pearl, which will give the pearls a different look. How the pearl will look will be mostly determined by the outer layer. For us people, the pearls looks best when the outer layer is made of nacre. In general we only speak of a pearl when this is the case.

Pearls with a thicker conchioline layer inside and thinner outside layers will look more grey-blue toned. When a pearl grows a thicker calcite layer, the pearl will look more dull and will have less lustre to it. The thicker the nacre layer on the outside is, the better the shine and lustre will be.

Apart from the material formation of the pearls there are of course different factors influencing the colour of the pearls. The main influencers for this are the temperature of the water, the depth of the water and the surrounding plankton.

The cultivation of the round pearl - The Mise-Nishikawa method

Although the most famous man in pearl history is without a doubt Kokichi Mikimoto, who allegedly invented the insertion of the nucleus, his patented production method for cultured round pearls was actually based on the Mise-Nishikawa method. Keep in mind, this method is merely applicable for South Sea cultured pearls and not for fresh water pearls.

The method consists of transplanting mantle tissue from one mollusc to another and inserting a nucleus of mother-of-pearl on to it.

The molluscs are brought under narcosis before the actual transplant. They then cut a small 4mm x 4mm piece of a donor-oyster/mussel's mantle tissue and transplant this into the other molluscs' gonad, the reproductive organ. Afterwards, the man-made nucleus will be placed directly on the piece of mantle tissue, making sure the upper epithelium layer of the mantle tissue touches the nucleus.

The nucleus is based on the Mise-Nishikawa method, where they grind mother-of-pearl into a powder, add a binding agent and pour it into a round shape. This nucleus, together with a piece of mantle tissue, is then inserted. The quality of the nucleus will determine the shape and quality of the pearl.

The pearl sack, made from the epithelium cells, will take about two weeks to form, after which the production of the pearl will start. The farmers would usually let the pearl grow for 24-36 months before harvesting them, though this period is often shorter these days due to extra costs, risks and market demand.

As you can tell, the production of pearls as we see them around us takes quite some time, care and patience. But in the end, all good things do, right?

Back to blog overview